At INGV, the GPS data analysis is carried out by using the three main geodetic-quality softwares existing in the GPS scientific community: Bernese (http://www.bernese.unibe.ch/), developed at AIUB, GAMIT (http://www-gpsg.mit.edu/~simon/gtgk/), developed at MIT and Gipsy/OASIS II (http://gipsy.jpl.nasa.gov/orms/goa), developed at JPL. Details on the different GPS data processing with the three softwares, as well as the details on the combination of the different solutions, will be soon available on this web site.In general, the data of all RING GPS, as well as some external reference sites, are analyzed simultaneously (network solution) with respect to satellites positions (i.e. orbits) and other parameters (earth orientation parameters, troposphere zenith delays, receiver and satellite clock drifts, etc) in order to obtain, for each site, coordinates with 1-2 mm/yr uncertainty for horizontal components and 5-6 mm/yr for the vertical one. The evolution with time of the position coordinates generates the so called “Time Series”.The velocity field resulting from the data processing is always shown with respect to a stable reference system to remove the regional trend due to the plate motion. In the Mediterranean Sea, the GPS velocity field is often represented with respect to the so called “stable Eurasia” reference frame, obtained minimizing the velocities of a large number of CGPS stations in the Eurasia plate. This figure, in particular, shows the GPS velocities of the RING sites with respect to an Eurasia reference frame obtained minimizing velocities of about 70 CGPS sites in Eurasia. 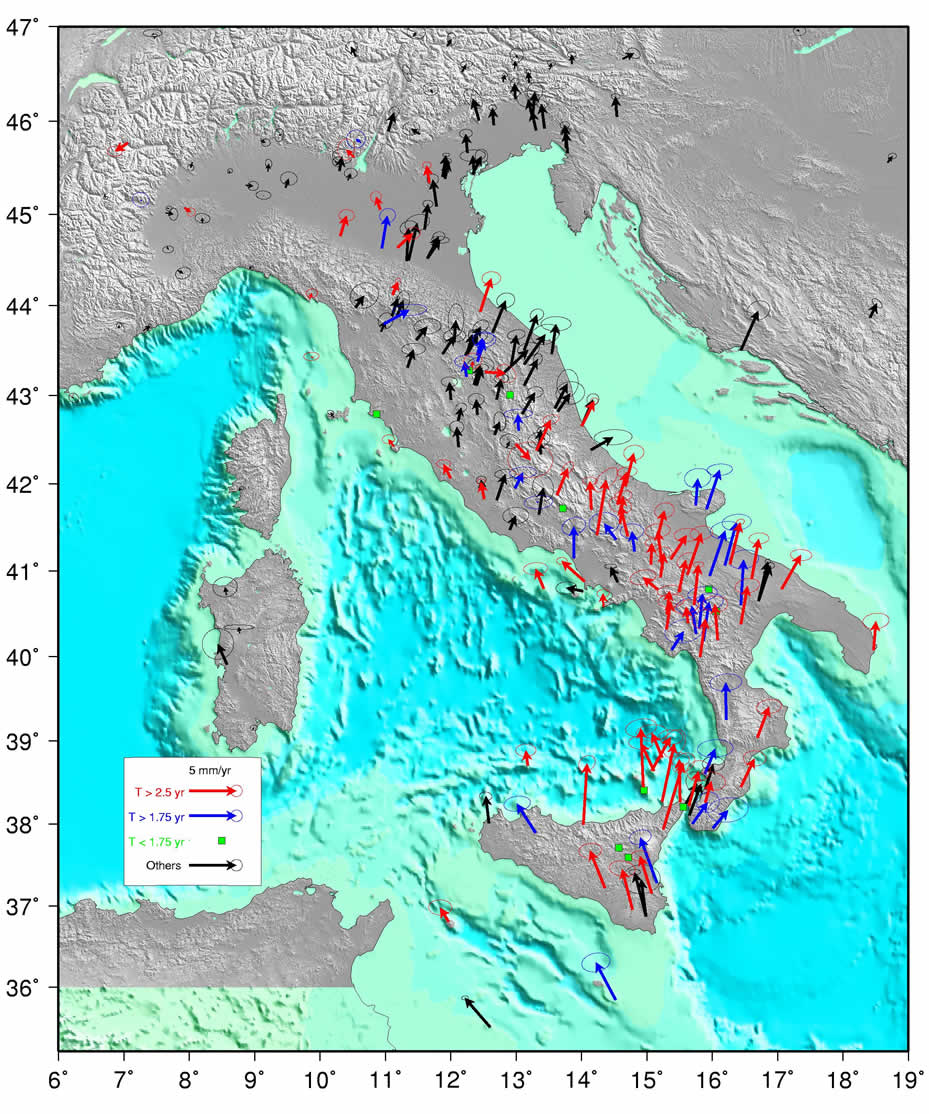 This velocity field enhances the main regimes of deformation of the different seismogenic areas, from Messina Straits to Southern Apennines, from Northern Apennines to Alps. GPS velocities show a clear extension up to 2-3 mm/yr occurring in almost all the Apennines chain. Those values seem to increase up to 4-5 mm/yr in Central Apennines region. The GPS vectors on the Adriatic side of the Apennines chain, from north to south, seem to put in evidence a counterclockwise rotation of this apparently rigid block with respect to a rotation pole located in Pianura Padana. On the other hand, on the Tyrrhenian side of Apennines chain, the velocity field seem to show, in the same reference system, a clockwise rotation of the Campania plain. The GPS relative velocities, within their uncertainties, between the sites in Calabria and those in foreland zones (Puglia, Hyblean mounts in Sicily), as well as the GPS relative velocities between the Puglia and northern Italy and Friuli seem already to be consistent enough for starting in studying the scientific open questions for which the RING network was created. Surely, in less than two years, the continuous data acquisition also from younger RING sites and the systematic daily data processing will provide an increasing detail of the deformation field and will allow also to study the particular seismogenic structures to understand how the deformation on those structures is accumulated.